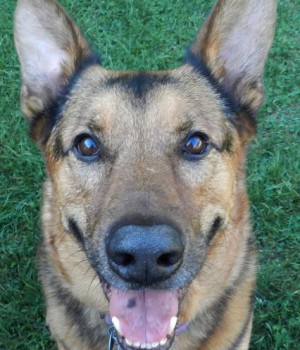 Lemme is a low-key boy most of the time; he’s laid-back and quiet in the house and just wants to know that his Person is nearby.

We don’t know what his first 5 years were like, because he came to us from an owner who had adopted him from a shelter when he was 5 years old.  The owner worked from home, and Lemme adjusted well to having him there most of the time.  Then, after 3 years, things changed, unfortunately; the owner had to change jobs and be away from home all day, five days a week.  Lemme became anxious and began chewing on rugs and furniture; he became depressed, and the owner asked GSRNE to find him a home where he could be happy again.

In his foster home, Lemme is enjoying being with someone who is home most of the time.  She has helped him learn to stay in a crate by putting in treats and confining him for short periods; he’s now able to stay crated for an hour or two at a time while she takes care of errands and appointments.  He likes meeting people and is a good host when visitors come into the home.

Lemme also likes going for walks, but he is reactive when seeing other dogs, so his foster Mom walks him in neighborhoods where she knows other dogs will not be tied out or behind an electric fence.  She’s working on getting him to look to her for a treat when another dog appears in the distance, but it’s a work in progress.

So far, Lemme has not shown an interest in playing with a ball or other toys, but he does not get noodgy in the house, looking for things to do.  If you’re using your computer, he’ll be content to curl up at your feet; if you’re watching TV, he’ll stretch out nearby and get up now and then to stroll over for a scratch behind the ears.  If you’re sitting in your fenced yard reading or doing some yard work, he’ll be happy to check the perimeter and just keep you company.   Lemme is looking for that easy-going adopter who will be a good match with his personality.