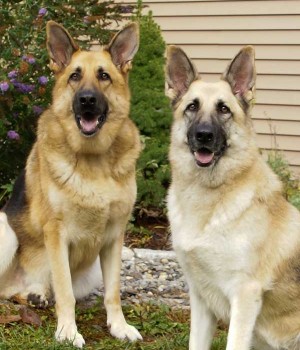 We learned about Jack and Mellie in July 2022.  They are littermates and were then five years old and living in a nice house with a yard.  The owners were getting a divorce and had moved out of the house, and their adult daughter was going to the house every day to care for these two dogs.

Needless to say, we worry about dogs living mostly alone, and we moved as quickly as possible to have our volunteers meet and evaluate Jack and Mellie.  They were friendly and seemed glad to have company, but they were not responsive to toys and were both overweight.  Their caregiver told us they could be reactive to other dogs, but they didn’t seem overly interested in our “test” dog.  They both passed the evaluation, and we began brainstorming about who we know who might foster two bonded dogs together, but we didn’t have anyone immediately available.  After that was not successful, we thought we would have to separate them; we had a foster home for a male but not for a female, and we couldn’t move Jack and leave Mellie home alone.

Some time went by, and then we were contacted by a couple who had fostered and adopted from us years ago.  They had just lost the second of their two dogs and were applying to adopt a middle-aged dog.  We told them about Jack and Mellie and asked if they would possibly take this pair as foster-to-adopt.  They gave it serious thought and then responded that they would do it.  We were so relieved and grateful!

The two dogs were definitely a handful for a while.  They had only had each other for play sessions and would wrestle and play fight for long stretches of time unless interrupted; Mellie would often yelp and let it be known she was not always enjoying those sessions.  They had been used to having kibble available all the time for free feeding, and neither dog ate well for a few days until they were fed in separate rooms and with a human there for company.  During walks, they were both reactive to other dogs and needed to learn to give attention to the person walking them.

Thank goodness the foster parents were committed to helping them and made good progress with all the issues except for the dog-reactivity, which we know can be difficult to overcome.  GSRNE knows of a good trainer in their area, and they started training sessions which are continuing.  Because of their foster parents’ commitment and follow-through, putting in the work with the support of GSRNE as needed,  Jack and Mellie are doing beautifully.  They like meeting new people and getting lots of attention, and they are learning to look to their humans for direction.  Their foster parents make fresh, healthy meals for them, and both dogs have lost their excess weight and now have waists again.  They go for daily walks on trails in the woods and are better at controlling themselves if they see another dog being walked in the distance.  They have learned to have fun with toys and to play fetch games without focusing on each other to an unhealthy degree.

We are so proud of them and their foster parents that it gives us great pleasure to announce that we’ve been asked to make their foster home their forever home!  They have new names to go with their new life and now respond to “Jaku” and “Melli”; not too different but symbolic of a new beginning.  We will soon be able to announce their official adoption and their GSRNE numbers!