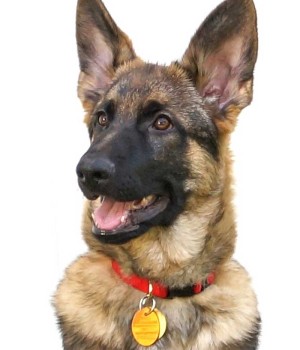 About a month ago we received a call from the owner of a 3 month old puppy. He was given the puppy as a gift and his apartment did not allow German Shepherds. His landlord wanted the dog out within a few days and the gentleman had nowhere for the puppy to go.  None of his family or friends could take him so he contacted us for help. A few days later he brought the puppy he had named Cesar to one of our volunteers who was able to socialize him with his daycare dogs and teach him some basic obedience.  He told us, for such a young puppy, Caesar has the calmest, most laid back personality he has seen.  We had a family with teenage boys that were approved to adopt a dog. They had recently lost their male dog, and we knew they would be the perfect home for the Caesar.