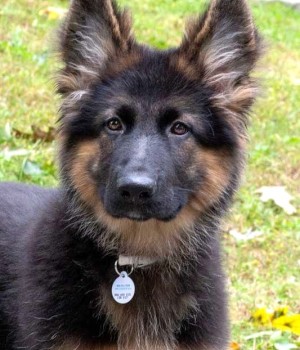 We don’t often get a call about a puppy needing help, but this did
happen during the summer. We were notified about a 10-week-
old male pup who had been purchased from a breeder by a family
who has a two-year-old male GSD. They were hoping the puppy
would become a buddy and playmate for their adult male and
help burn off some of his high energy. Instead, the adult male
resented the puppy, who was in danger of being hurt. The owner
asked the breeder to take him back, but the breeder said doing
that would present a risk to her breeding females and other pups
for sale.
Fortunately, one of our volunteers learned about the situation,
took in the puppy and fostered him until he could be adopted.
Also fortunately, we had a repeat adopter family that had recently
lost their senior GSD male and were hoping for a young dog who
would enjoy playing with their children and going on family
outings. It was love at first site, and they named the little pup
“Grizzly.” He has his own safe spot in their car, wearing a
harness and seatbelt and lying between two of the children. He
has been to a flag football game to cheer on one of his kids and to
a birthday party for their grandfather. Grizzly is GSRNE #615,
and we love seeing photos of his adventures with the family…he
is becoming one well-socialized pup!