Please note: If you have adopted one of our dogs and would like to have his/her info included here, please email HappyTails@gsrne.org.

Also, if you have already sent in a story and pictures and don’t see it appear here within a few days, please ping me again to be sure I got it.

We all LOVE reading these Happy Tails stories. They make all the hard work and expense worthwhile. This is what rescue is all about! 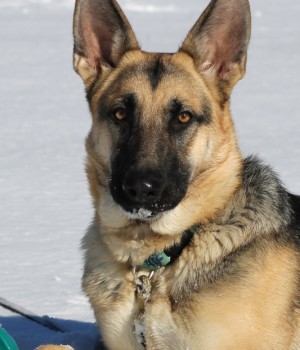 If intelligence is on the top of your list when you think of the qualities you want in a GSD, then Suki may be the dog for you. Her keen intelligence will help her excel in obedience or agility and her serious hunt drive would make Nose Work fun for both of you, especially if the reward is a toss of the ball!

Suki came into GSRNE in January 2015, when she was under one year old.

She had been allowed to run loose with an adult male GSD in the family, and th
e two of them were killing a neighbor’s chickens.  When he threatened to shoot her, the owner found Suki another home, but the new home wasn’t feeding her so the owner took her back.  The owner then put Suki on Craig’s List, and she was adopted by a woman who had cats; Suki went after the cats and kept searching for them even after they were put safely away, so she had to move again.

Suki has a lot of energy and serious ball drive; during the winter she would run into the fenced yard and find balls buried under a foot of snow.  She wants to have things to do and will play ball without wanting to stop, loves going for walks, would be a great partner for a jogger. Her adopter will have to be an active person and really enjoy having fun with this girl!

Though she is unsure about new dogs, with correct introductions and a little time, Suki would be happy to be in a home with another young dog. Though she will probably never be a social butterfly, she ignores dog’s
passing by when out on her walks and is happy just being out with you.  Her foster parents have been teaching her manners and working on changing behaviors that she had learned from the lack of structure/guidance before coming into GSRNE. Not the bravest of shepherds, Suki is looking for someone to look up to and snuggle with (and did we mention play ball?) and we now feel she’s ready for her forever home.